Posted on August 16, 2016 by myfamilytravelsblog

We had decided to end our African tour enjoying the Spice Islands. Zanzibar is made up of several islands, the largest of which are Unguja (commonly referred to as Zanzibar Island) and Pemba. Zanzibar belongs to Tanzania but is clearly proud of its independent history. Swahili is spoken here and although we didn’t have time to learn much, “Jambo” (hello) and “Asante Sana” (thank you very much) were easy enough for us. Everyone here is so warm and easygoing, it was a delight to visit.

The capital of Zanzibar is named, appropriately enough, Zanzibar City. We arrived late that night and didn’t get to see much of it. The hotel we stayed in for the night was beautiful and when we had this view in the morning from the restaurant while having breakfast,

we were saddened at not having booked at least one more night here. Unless your flight gets in early in the morning, we do recommend staying two nights in Zanzibar City in order to enjoy it. Zanzibar is a mainly Muslim country and thus women cover most of their bodies even while taking a stroll on the beach.

As soon as we were done with breakfast, our guide carted us off to the northernmost tip of the Island where we were booked to stay at “La Gemma Dell’est”, which translates to Jewel of the East. We soon learned why. It took our breath away!

This all-inclusive resort caters mainly to Middle-Eastern tourists. We met tons of Israelis although there were a few Italians thrown in for good measure. The all-you-can-eat meals were fantastic and having a waiter bring drinks made from hibiscus and lime to you while lying by the pool is heavenly. The resort brings in different acts to perform nightly and these can be enjoyed at the “Sunset Lounge” while listening to the waves lap calmly underfoot. 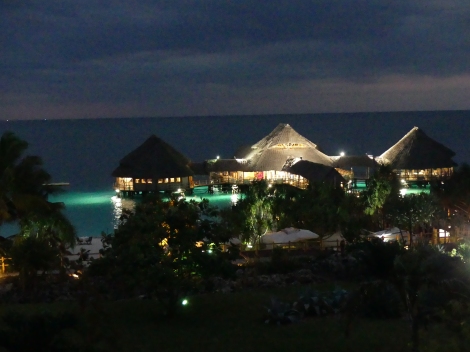 Zanzibar has the cutest crabs: white and very shy.

They didn’t even try to pinch us when we grabbed them.

It also has gorgeous, and humongous, starfish but you won’t get to see them because…I lost all my pictures! It happens. Not to worry though, Fernando’s survived. The sand is soft and the water clear and calm. On our second day here we were talked into taking a snorkeling tour over the coral reefs by one of the many peddlers walking the beach. While it might get tiring to have to say “Asante, no” over and over again to the many people trying to sell their wares, they are only trying to make a living and it’s a small price to pay for the privilege of enjoying their beautiful beaches. Who can be unhappy here?

We took off early the next morning in order to beat the “rush” of all the other visitors to the reef. It was only a short ride in a small boat to a secluded area between our resort and Tumbatu Island right across. To my untrained eyes, the coral seemed a bit run down but fish were plentiful. If you go snorkeling here, make sure to bring some bananas with you. Turns out Zebra fish LOVE bananas!

As beautiful as this all looks though, it wasn’t enjoyable due to some small and almost invisible beings. Can you spot the one lurking in the video? When at first I began to feel tiny electrical discharges on my arms, I convinced myself that I was imagining it. The guys were happily swimming around so it had to be me, I thought. When one of those stings got me right across my lips, the pain literally took my breath away. I had had enough; it forced me out of the water and back onto the boat.  Soon enough the guys got stung too many times as well and also decided to bail.

Our guides then took us to a deserted and beautiful beach for lunch where Alejandro got buried so deeply in the sand, he had a hard time leaving when it was time.

All in all, Zanzibar Island was beautiful: water is clean, sand is soft, food is delicious, people are nice but…I’d rather go to Mexico for beaches. What can I say? I am a beach snob. Haven’t been everywhere yet but as of today, I still prefer Mexican beaches to any others I’ve been to, although Zanzibar is an incredibly close second on my list. 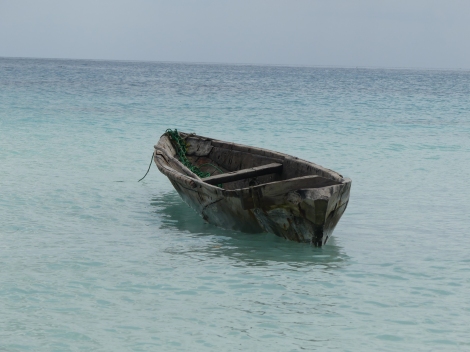 We’ve got Thailand on our radar though and I’ve been told I will change my mind. We will just have to wait and see.

We enjoyed a beautiful couple of days here but now it was time to get going again to our next and last stop before heading home: The Spice Plantations and Stone Town – a World Heritage Site.