The Most Interesting Man in the World

Posted on August 4, 2016 by myfamilytravelsblog

Forget the dude from the beer commercials, we’ve met the real deal and his name is Nelson Siboza.

As a young boy of 11 years, Nelson had to run away from his home in Mozambique because of the civil war. He described how young boys in his village were given weapons and told to kill their own families if they wouldn’t join the fighters. Instead, Nelson joined a group of older village boys and together they walked through the Kruger park to reach South Africa.

Not all of them made it: some were killed (and eaten) by crocodiles, others were lost in the bush one night as a herd of elephants walked thru the place they were sleeping and all of them scattered into the darkness. Actually, Nelson has written a book which is waiting to be published, called “Speaking to Darkness”, the title taken from that hectic night.

After a few days, some of the group found each other and made it to a small village. The village elders decided that they would adopt the boys and called the families to come choose. The boys were all taken by families who needed field hands but Nelson was too small for such work so no one chose him. He considers himself terribly lucky for this fact as he was eventually placed with a family who instead of making him work, sent him to school.

South Africa has 11 official languages and Nelson is fluent in all of them, as well as Portuguese and a bit of Spanish. He came to acquire all these languages by being lucky (his word) again. Since he had no money to continue his studies after high school, Nelson was forced to take a job as a taxi mechanic. Taxi drivers originating from all over South Africa, he had to learn to speak with all of them and this is how he became a polyglot. It obviously didn’t hurt that he’s a true people person.

Nelson saved his money and eventually made it to Guide school. He recently located his original family in Mozambique. He, again, considers himself terribly lucky to have regained all members of his original family which he does remember; the ones who died, he doesn’t, and thus can’t miss them. He now has two families! Nelson also recently found one of the boys he had run away with and asked him something which had been gnawing at him all these years: “Why had these older boys taken him with them when he was just a small child?” This, now grown, man asked Nelson if he wanted the truth or a story. The truth: “We took you because you were young and easily manipulated. We could send you walking ahead of us to make sure there were no land mines.”

Nelson’s story doesn’t end here. He, along with his white Afrikaans girlfriend, is building a “Spin City”: basically a public events arena where cars come to drift and compete while the audience places bets and cheers them on. He already has a Facebook page: “ShonalangaSpinCity” and expects to open mid-November. Nelson believes the proceeds from this investment will be enough for him to buy 3 micro buses which will enable him to open up a public transportation business in Mozambique, a country which is sorely lacking in such services. Years down the road, he will build a small Eco-hotel in an island off Mozambique’s coast for which he already owns the land. Nelson has such a passion for life that it’s easy to see how such a smart kid survived the terrible events from his childhood to call himself “lucky”.

We learned a lot about the animals from Nelson but we also learned a ton about Mozambique’s and South African history and politics from him. As a small example of the sort of things we talked about during “sundowners”: the Greater Kruger National Park is comprised of Kruger National Park (which belongs to all South Africans) plus twenty PRIVATELY owned game reserves. This is land owned by white people but it wasn’t always so and thus is a source of ongoing conflict. The land was taken by force from the African tribes by the white colonists. When Nelson Mandela became president, he promised the people that the land would be returned to its rightful owners but that promise has gone unfulfilled. This is the grievance the EFF is basing their platform for the upcoming election on. While Mandela was unable to convince the white landowners to give up the reserves, he did convince them to take down the fences which kept the animals from moving freely throughout the area. This is a great achievement for animal conservation but it didn’t benefit the black South Africans one bit.  The animals may roam freely between public and private land but access to the private reserves is limited to guests of the lodges such as ourselves. Due to the EFF’s push, the ANC, which is currently in power and expected to remain so, has increased efforts to compensate the descendants of those African tribes which were displaced. Many people feel that monetary compensation is not enough: how does one place a number on his grandfather’s resting place? People are still fighting to get the land back. Nelson believes that white South Africans are arming themselves, expecting a battle while blacks don’t want to fight but will engage in one if necessary. In the end, he expects the land to be returned to the descendants of the displaced African tribes such as our own tracker, Shadi.

“I just learned more about Mandela while watching the hippos than I ever did in school” exclaimed Fernando one evening. I think our work here is done. 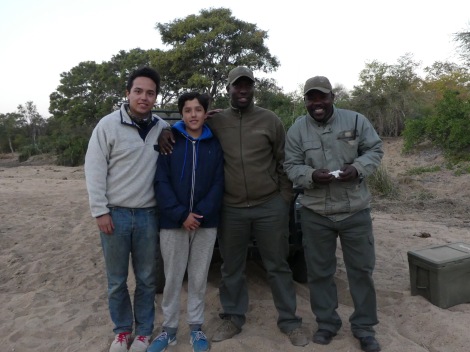 One thought on “The Most Interesting Man in the World”