Posted on July 16, 2016 by myfamilytravelsblog

We left CapeTown early the next morning to drive the famed “Garden Route”. The main highway which crosses southern South Africa horizontally is the N2, also named Nelson Mandela Blvd. and it will take us all the way to Port Elizabeth with a few stops in between.

Our first such stop was at Vergenoegd. This vineyard employs a fun pest control method: ducks. These are no ordinary ducks, they are Indian Runner ducks and they LOVE snails. Every morning at 9:45am, the ducks are let out to begin their workday in the fields. We were late getting here and thus missed the duck parade but we stopped anyway and got a personalized tour of the pens which made it worthwhile. Our guide was a young South African comedian who kept us on our toes. The vineyard keeps several kinds of ducks: 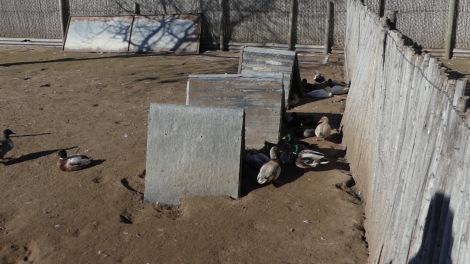 The runners are considered the best workers because they are taller and slimmer than the others and this makes them uniquely equipped to eat the snails at the top of the plant and not only the ones on the ground as the other ducks do. They currently have 1,117 runners but are breeding them with the goal of having two thousand. Every duck breeding “family” is kept in a separate pen: one male with three or four females. Also kept in the pen are a pair of geese.

These are employed as bodyguards to protect the ducks and their chicks from predators such as snakes, rats and preying birds. As the ducks lay eggs, these are taken away to the incubator where they are rotated and kept warm for 45 days until the chick hatches. Our guide handed us one such egg to look at and it was amazing to feel the chick moving inside. 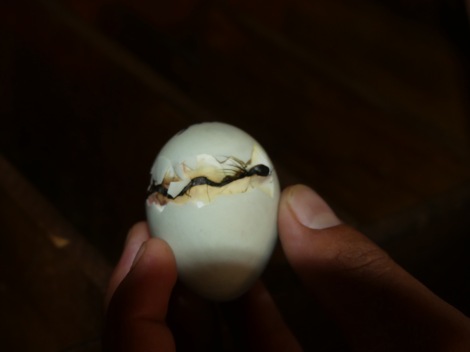 We had to be quick though to ensure the egg didn’t get too cold.

After the chick comes out of the egg, (this guy is only a few hrs old)

it is placed in the first of six incubators, each one a degree cooler than the previous one, for a day at a time in order to begin acclimating to life on the outside. After these six days the chicks are transferred to open pens kept indoors where they will spend a week at a time at six of them, each one a bit closer to the outside until they graduate to outdoor pens. The rate of success is only 50%.

As our guide explained this process to us, he emphazised how much care went into each of these chicks. It was obvious how much he enjoyed his job. Fernando asked him if they incinerated the ones that didn’t make it. Our guide looked stricken and he replied no with such a hurt look that we all got somber. He then explained, with the most serious face, how they buried the ducks and held little funerals for them. We all felt terribly callous at having suggested they were simply disposed of…until he literally fell to the ground laughing like crazy at us. I told you he was a comedian! We enjoyed our tour tremendously.

It is a bit over an hour’s drive from CapeTown. Compared to Boulders Beach, Stony Point has many more Penguins, lots less people, and costs 6 times less; it is beyond me why it is not overrun by tourists. We spent quite a bit of time here just looking at the Penguins 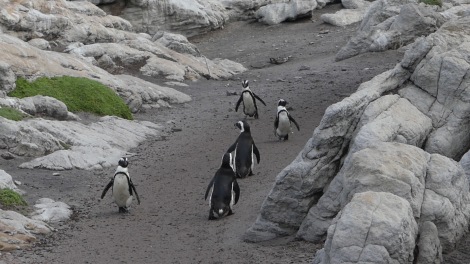 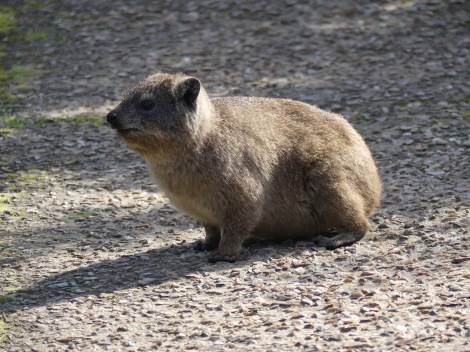 furry mammals which can also be a threat to the Penguins since they sometimes take their eggs. The Penguins being endangered means that conservationists keep a close eye on the number of dassies around and intervene if necessary.

The N2 highway runs along the coast with great views of the ocean. 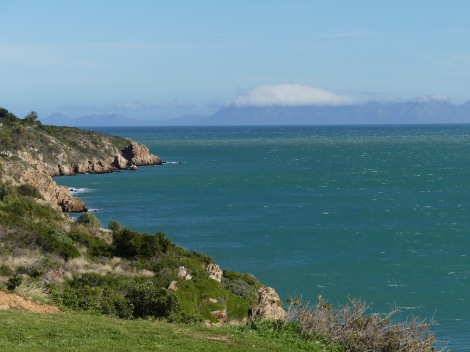 Once again, signs warning of baboons in the area were everywhere. A few more kms down the road, we ran into some live ones at a rest area.

South African Baboons are unique in that they can often be found combing the beach looking for prawns hidden in the wet sand. Apparently they can also be found in rest areas.

We stopped to take pictures of the landscape without noticing the big male rummaging thru the garbage can. 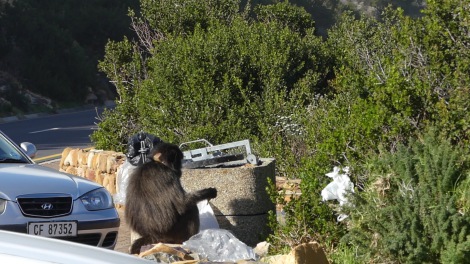 He didn’t pay any attention to us so we stayed and took some pictures.

When a whole troop of baboons began descending from the trees across the highway and moving in our direction, we took it as our warning to keep driving.

We made it to Hermanus later that evening and got a good shock when we were shown our room.

Hermanus sits at the edge of Walker Bay and it is famous for its whale watching which one can do right from the beach.

We didn’t spot any whales from our balcony but we had something even better in store. Early (5:30am) the next morning we drove on to Gaansbai, where we boarded a small boat and travelled only 10 minutes out to sea. We were still within sight of shore when we were handed wet suits and face masks.

Why, you ask? In order to climb down into a steel cage and take a look at one of the most feared monsters of the sea: Great White Sharks.

The cage is about 5 feet long and can fit 8 people at a time. 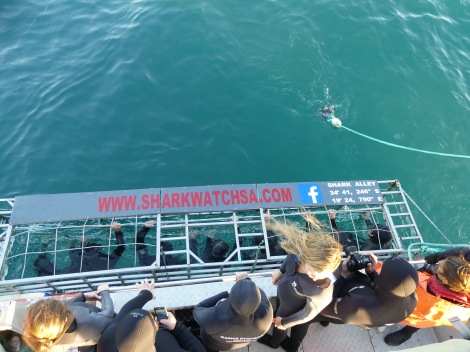 The water is the coldest I’ve ever felt and although the 7mm wet suit is supposed to keep you from the worst of it, it was still shocking getting in the water. Some people left the cage with purple lips. Not me though, I fared worse. I was sicker than a puppy. I forgot my Dramamine at home and didn’t notice until that morning when pharmacies were closed and there was nothing we could do about it. The sea is so rough, I almost tossed my cookies before I even got into the suit. I had thought I would be so afraid of the sharks that I would have trouble getting in the cage. On the contrary, I was so sick, I couldn’t wait to get into the water where I thought I would feel better. No such luck though, the waves shook the cage with such force, that it was all we could do to not get tossed around into each other once underwater. The cage has a couple of bars which you’re supposed to hang on to and the guides place weights on you as you’re going in to help you stay underwater. It wasn’t enough though and we had to actively fight against our buoyancy to stay under. The sharks were quick to come by. They swam by the cage looking at us out of their black unblinking eyes in an inquisitive manner. (Unfortunately, our underwater pictures can’t be uploaded to this site.) It was awesome! I just wish I hadn’t been so sick. At one point I couldn’t hold it any longer and I lost my breakfast to the ocean. Two sharks immediately came over to inspect. I told the boys they really ought to be grateful to me for that. We stayed in the cage for a very long time, we saw 11 different individual sharks (we had a biologist on the crew who kept track) and a few of them were longer than our cage. It was a lot less scary than I thought it would be and I’d gladly do it again if I could only manage my seasickness.

After that highly enjoyable adrenaline rush, we ended the day hiking around Hermanus and enjoying our beautiful B&B.