Posted on July 3, 2016 by myfamilytravelsblog

Our third day in Iceland was spent on a very ambitious quest to drive the south coast all the way to Vagnsstadir. It took us the entire day, mostly because it’s impossible to resist stopping for pictures every km or so. Although it must be noted that this is no easy thing as Icelandic roads have no shoulders and every small exit isn’t paved but rather covered in pebbles. We got stuck once but with the three boys pushing we made a quick getaway.

We found the roads here to be in good condition which is surprising given the weather. Icelanders are not fast drivers but there are so few of them on the road that most bridges consist of only one lane, forcing cars to take turns crossing them. Not a problem at all. Sheep are everywhere literally, on the road and on top of the mountains, as are horses. Icelandic horses are the only ones which can do the “fifth gait”. They say it developed because of the rocky terrain and it almost looks as if the horses are tippy-toeing. Lots of people keep the Icelandic horses as pets and are very proud of their lineage. No “foreign” horses are allowed on the island. The rule is so strict that if ever one of these horses left Iceland, it would never be allowed back again. We found them to be curious and gentle animals and stopped more than once to pet them.

Our first “official” stop was at Seljalandfoss.

This waterfall drops about 40 meters but what’s a number? What you need to know about it is that it is gorgeous and rightly deserves its spot in Iceland’s top tourist attractions. If you follow the path, you’ll be able to walk behind it.

We were here early, before the tour buses, and had a beautiful time enjoying the peace before the hordes of tourists got there.

Our next stop was Skogafoss which  drops 60 meters and is 25 meters wide.

In case it’s not obvious, the water is freezing cold. We tried getting all the way to the edge of it but even the mist emanating from it leaves one’s teeth chattering. A strenuous hike 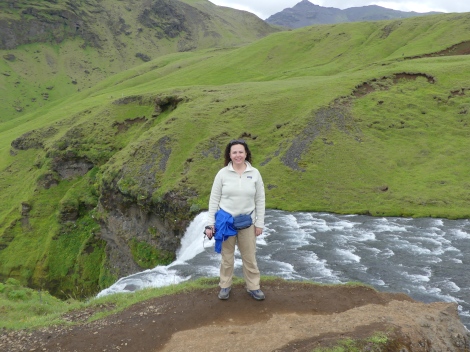 takes you to the top of the falls from where experienced hikers, and a few dummies, begin the trek into Thorsmork (Thor’s woods). Undoubtedly inspired by the sheep, the boys decided to follow their own path to the top of an outcropping.

It was about an hour before they agreed to climb down.

Following the road east, we found ourselves at Reynisdrangar. 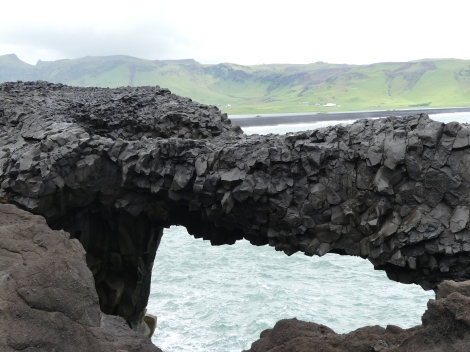 Here, basalt rocks lie strewn about as kids’ Legos. The wind was howling and a light rain falling but the view was such that we wouldn’t be deterred. 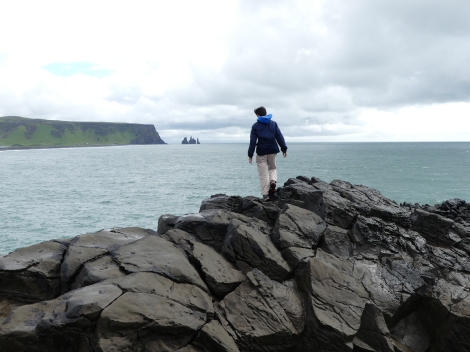 We continued on to Reynisfjara, the famous black beach. 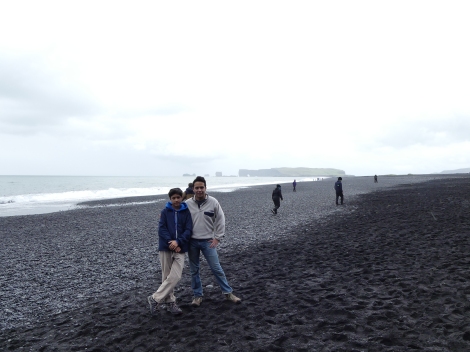 The sand here is as tick as play sand and would invite one to play if it weren’t for how cold it is. Puffins nest on the roof of the cave. 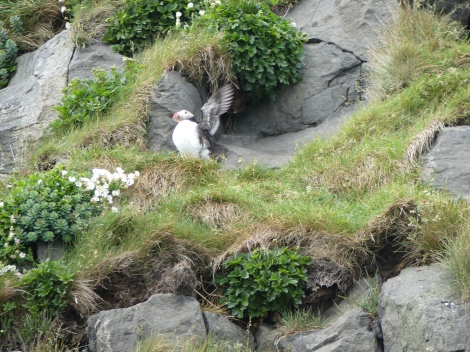 On sunny days, they spend most of the time out at sea so there was a silver lining to those stormy clouds as we were able to spot a few. Once again, the boys decided to climb the mountain 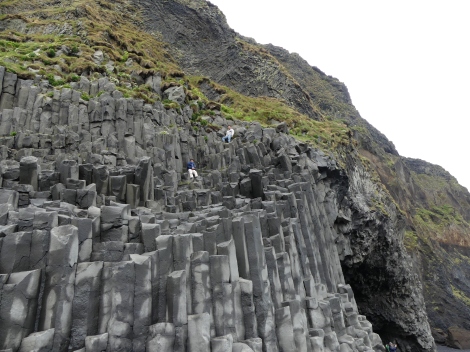 and got so high 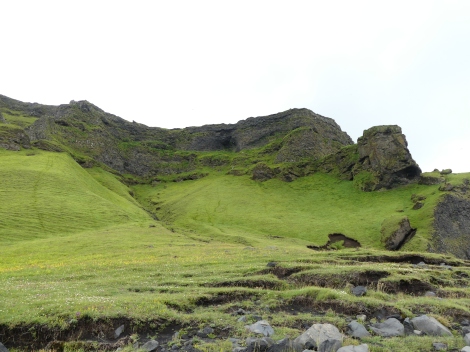 that the tourists stopped to take pictures of them.

We were all tired, cold and wet now. The guys all fell asleep while I drove us to our destination, with so many stops on the way that the boys threatened to confiscate the camera if I stopped again. It’s just impossible not to though when beauties like this one are lying just by the side of the road.

But the best was yet to come.

One thought on “Chasing Waterfalls ”