Posted on August 12, 2013 by myfamilytravelsblog

We took an afternoon (5:30pm) train from Meteora to Athens. While these trains do have air conditioning, it isn’t very efficient and takes several hours to cool the cabin, by which time we had arrived.

We had planned to spend a couple of days in Athens but upon getting to our hostel, the attendant informed us that if we wanted to continue on to Santorini we would have to leave the following afternoon or be stuck for three days. This is exactly what we like about hostels, they see so many people passing by that they tend to have the best information. Although it was midnight and past her quitting time, she helped us buy ferry tickets online, plan our walking route thru Athens for the following morning and made sure we knew how to get to the docks afterward. The hostel wasn’t much but the advice was invaluable.

We got up early and managed to do Athens’ major sights in less than a day, a feat even for us. The nice thing about starting early is that you can enjoy the sites before the hoards of tourists descend on them.

and the Temple of Olympian Zeus (construction took 700 years!) 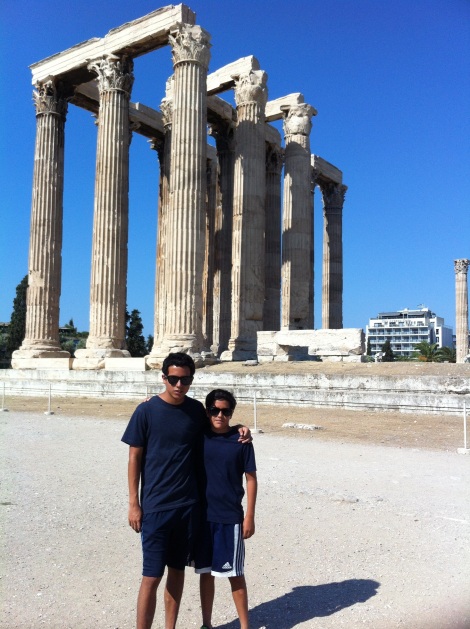 almost entirely by ourselves.

and Theatre of Dionysos.

I won’t tell you the stuff you can easily search for online, what I will tell you is that the Acropolis Museum at the foot of the hill is a MUST-SEE. All the history and artifacts from the Acropolis are in here and your visit will not be complete without it. You can observe the real Caryatids (the ones outside are reproductions) being restored inside. The museum also houses what remains of the Parthenon’s facade (this is just a model). 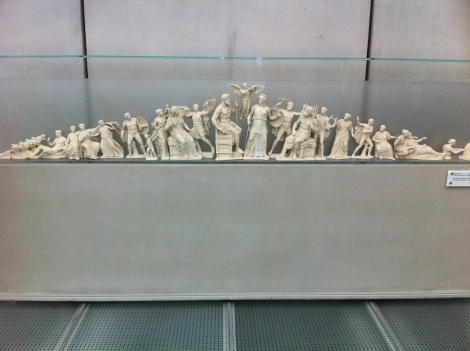 Although no pictures are allowed inside, you can take some pics of the reproductions in the Acropolis Metro station.

The Metro was great in the morning but by mid-afternoon it was very hot, full of people and lacked air conditioning. It stunk so bad we considered walking. We also had some “odd” incidents happen while riding it. A guy riding opposite Alejandro winked and squeezed his knee as he got up to leave. Whenever we get on a Metro, we sit wherever there is space and that’s usually not together; so we didn’t notice the creep until afterward. We thought it was an isolated incident but men kept staring at him and on the later ride to the docks, some old guy offered him cigarettes! While I have only had to yell at two different guys to let go of me (something I was prepared for) we certainly didn’t anticipate anything like this. Athens is the only place in our travels where we have actually felt unsafe.

We booked a private cabin for our 6 hour ferry ride to Santorini and were able to sleep thru most of it.

Santorini is essentially what remains from an island destroyed by a volcanic eruption. It is beautiful to look at with its caldera in the center.

Santorini is advertised as heaven on Earth and sure it’s nice, but heaven? I don’t know about that. The beaches are pebbley at best, jagged rocks at worst. Although the locals refer to them as “sandy” one must imagine how sandy they will be in a few millenia. These are two of the most famous beaches in Santorini: “Perissa”, black from volcanic ash 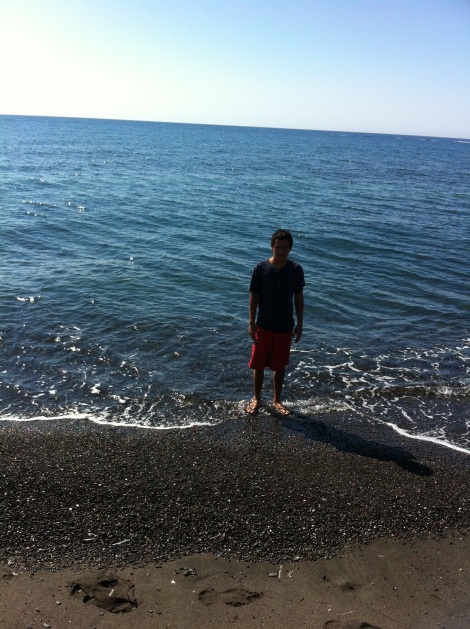 and the “Red Beach”, thus called because of the color of the cliffs that surround it.

While the water is absolutely gorgeous, it is also freezingly cold. Even the boys quit swimming before I did but that’s only because I was determined to get my fill out of it.

Everyone makes such a hullabaloo about Santorini being always full and recommend people book ahead of time. We haven’t had any trouble getting a good and reasonably priced place to sleep even though we showed up without booking the first time and we booked just one day ahead the second time around. My advice would be: don’t fret about it, find a place with a swimming pool and rent a car if there’s more than 2 of you (otherwise get a motorbike). Although it might seem counterintuituve, there are plenty of parking spots everywhere and this way you’re not constrained by the bus schedule.

If you’re anywhere near Perivolos, “Santa Irini” bakery is open 24hrs, has good slushies (€2) and coffee (€2) but it’s their sugar doughnuts which are to die for. It doesn’t hurt that the entire family is super nice.

Fira is located at the very top of Santorini and it’s just so terribly pretty, specially in the afternoon when small shops and restaurants open up on its every last nook and cranny. 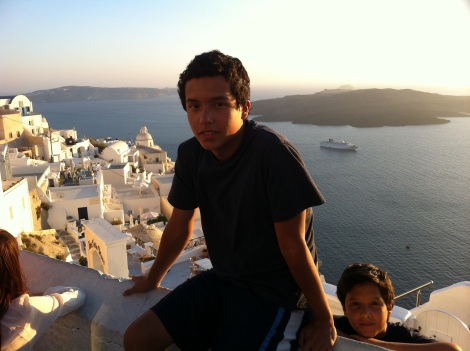 Fira and Oia (another tiny cliff town in Santorini) both claim to have the best sunset on the planet. We experienced both and can’t decide, you be the judge:

We stayed in Santorini for an extra day, not because we wanted to but rather because ferries run just three days a week. This is us suffering the wait:

Fresh water in Santorini is very scarce so they built a desalination plant, something that interested us quite a bit. The swimming pool at our hotel

and even the shower, used this desalinated water. We’ve got a newfound urgency for water conservation now. If anyone thought that desalinating ocean water was going to solve our planet’s problems, it’d be a sad mistake. Salt is not totally removed by the process and swimming in it is not as nice as one would hope for. Not to mention that showering with it leaves hair as stringy as an old broom. Let’s all be more mindful of our water usage, my hair will appreciate it.

From Santorini, we took a midnight (it didn’t show up until after 1am) ferry to Kos. Again, the port was full of creepy and agressive Greeks. We arrived in Kos six hours later and considered staying overnight but just as it had happened decades ago, we’d had enough of Greece and booked a one hour ferry to Bodrum, Turkey.

At the docks I observed a woman arguing with the ticket vendor. She was traveling with her husband and two young boys. She could have been me. I don’t know what was wrong with her tickets, but at some point she was so frustrated she screamed at the ticket vendor that “in America her problem would be corrected”. When the ticket vendor simply shrugged her shoulders, she pushed it further saying “That’s why America has the best customer service”. I wanted to go over and hug her because I completely understood her frustration but also because it is only by watching from the sidelines that the futility of it becomes obvious. She was right in everything she said but in the end it doesn’t matter one bit. I hope her trip went uphill from there.

Within an hour we were in Turkey where the immigration officer made a mistake with our visas and fixed it using crazy glue. “No problem”, he answered when I asked if we would have an issue when trying to leave but he still wouldn’t allow me to take a picture of him doing it and hurried us through. Hmm…