Posted on July 15, 2013 by myfamilytravelsblog

It was after midnight when we arrived in Tallin, Estonia. Our hostel had advised us not to pay more than €3 for a taxi ride. What they forgot to tell us what that taxis wouldn’t be waiting at the port and had to be telephoned instead. We didn’t have a cel phone and the station doors had locked behind us. We were almost the last people there when an unoccupied cab drove by wanting €10. “I’m expensive”, he explained. As we debated paying that or walking, he left alone. We didn’t have a choice anymore. We weren’t scared though: the ambience was relaxed, the hostel had said it was a 10min walk and we had a map. We took the map out and strapped our packs on. We hadn’t begun walking when the same cab swung by and said what we took to mean that he’d take us for €3. We quickly got in. It was a short ride and when we tried to pay him he refused: “Not three, FREE. Welcome to Estonia!” How lucky are we?

Tallin is as beautiful a medieval town as Disney could have dreamt up but for real.

The castle walls and gates are still standing in most places and can be climbed in some. 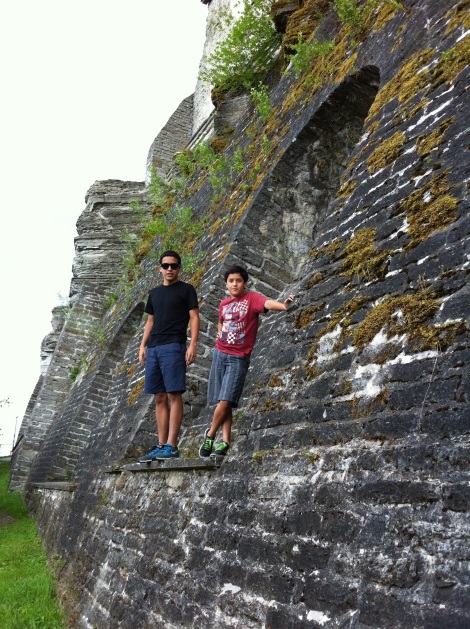 While strolling thru the town we ran into Mitri, our kind taxi driver.

We slowly made our way to Rekoja Platz, the town square. At the corner of the square, right under the Hall Tower you will find the tiny “Dragon”, a medieval tavern serving tasty elk meatpies(€1) and elk stew(€2). We liked it so much, we even came back to buy some for the bus ride out of Tallin. 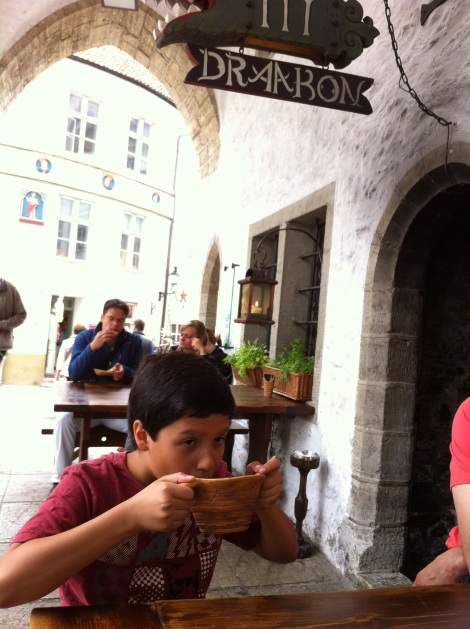 While the interior of the tavern truly takes you back to the dark ages, we elected to eat outside on the picnic tables overlooking the once-a-week outdoor market on the square.

and the Pink Palace where the Parliament sits.

Here we ran into a crowd waiting outside a building flying the flags of Estonia, Germany and the EU. We didn’t have to wait long for the president of Germany, Joachim Gauck, to come outside and start shaking the hands of the people assembled there. The boys hurried over to shake his hand while I wondered about how light his security detail seemed to be.

When Estonia belonged to the USSR, Tallin was designated for tourism which explains how well preserved it is. There is another side of Tallin though, which is best represented by the Hotel Viru, a joint Finnish-Russian construction. The explanation for that cooperation between the two countries is that Russians needed to complete the hotel in less time than their bureaucracy would allow and the Finns needed the work. While tourists were allowed in Tallin they could not be hosted in private homes, even those of family members; hence the need for the hotel. The ultimate motive for that rule is simple: control. Estonians joke that the hotel is made up of “micro-concrete”: 50% concrete & 50% microphones. It’s not a baseless joke since the hotel was used by the KGB to keep tabs on “interesting” visitors. The hotel’s elevator goes only to the 22nd floor, but there is a secret 23rd floor where KGB men sat and listened by using microphones implanted in walls, ashtrays and even dishes to anyone they deemed suspicious. 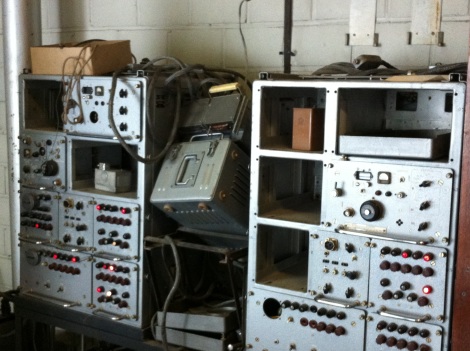 All of this happening behind a door marked “There is nothing here”.

The tour consists of only two small rooms full of old artifacts, but the guide is very adept at conveying the history of the place and just being able to handle all of these things makes the steep €8 ticket price worth it.
Special camera for taking pictures thru peepholes: 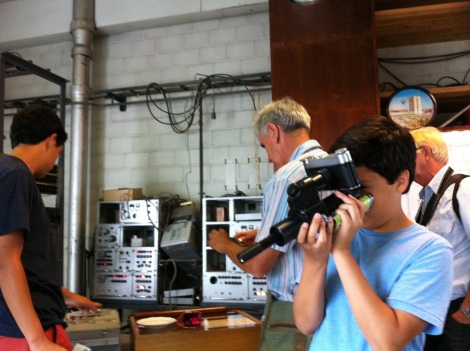 Red telephone could only take incoming calls from the higher-ups:

Decoy purse which would throw ink on anyone looking inside:

And then there are the views from the 23rd floor terrace:

After the recent surveillance scandals in the US, this doesn’t seem quite so funny, does it? 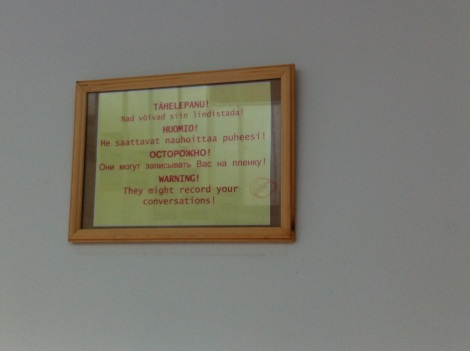 Every last nook and cranny of Tallin is beautiful. 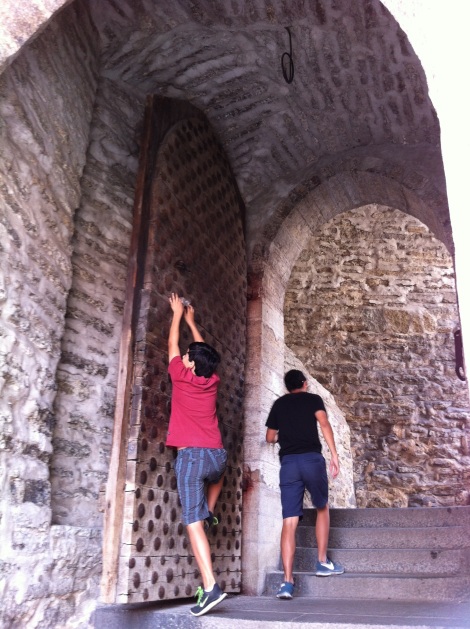 Tallin is gorgeous, has some tasty dishes and a very laid back feel.

Relaxing back at our hostel before taking the train to Riga:

Tallin is one of those places you just don’t want anyone to know about so you can keep it all to yourself while at the same time wishing everyone could experience its magic for themselves.