Posted on July 13, 2013 by myfamilytravelsblog

We’ve become experts at riding the Russian Metros, we even believe we can read a bit of the names written on them and can understand snippets of overheard conversations. Wishful thinking I am sure but this has led to us feeling very comfortable doing it. It came in handy when we had to make our way to the train station at 5am the next morning headed for Helsinki. 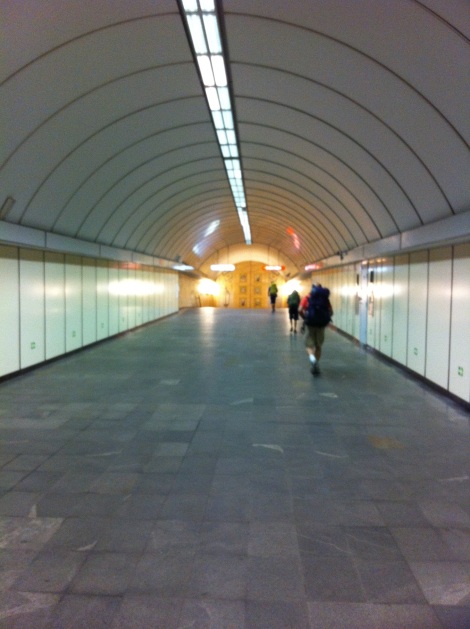 We took a rapid train and were in Helsinki in time for brunch.

Everyone there seems to speak English so we had no issues in that respect.

We dropped our packs off at the station lockers and proceded to find the docks in order to buy our ferry tickets for that same night.

There is a very famous street market beside the docks called Kauppatori. 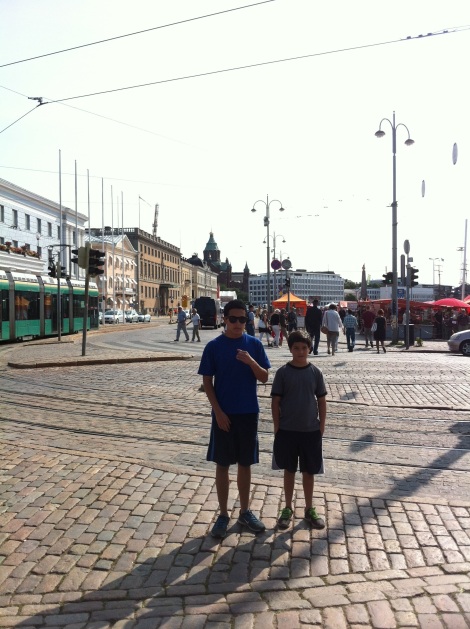 Prices here are so expensive, it made us laugh in disbelief. No wonder since the huge cruiseliners let their passengers off right here. 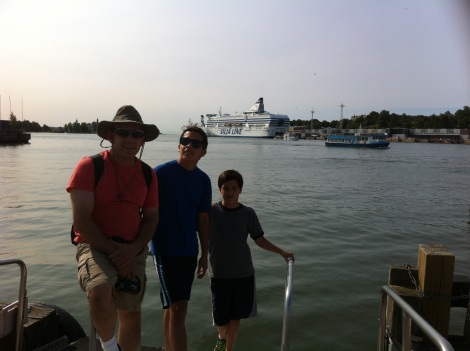 On top of outrageous prices, sellers here are downright rude, they have so many captured clients they can afford to be.

We asked an attendant at the ferry terminal if he would eat at this market and he replied with a resounding no, instead gave us directions to a different one inland. Good thing he did, prices at this second market were still high but our eyes didn’t fall off their sockets upon gazing on them. The market was smaller and filled to the brim with Finnish people doing their shopping, not a tourist in sight; just what we wanted

After visiting several stalls, we settled for one owned by a Venezuelan transplant, Jose, and attended by his daughter, MariAngeles. They seemed to be so glad for the opportunity to speak Spanish, they wouldn’t leave our side. Jose told us about what a huge bureaucracy the Finnish government is and how he had to wait four years for a stall to open up in this market so that he could buy it. He said he is not allowed to cook anything himself but instead has to buy his product from a predetermined baker and every stall sells the same exact thing. He apologized profusely about how bland his meat pies were before we even begun eating. They were alright, served their purpose but certainly not good enough for the market to be as full as it was in our opinion. 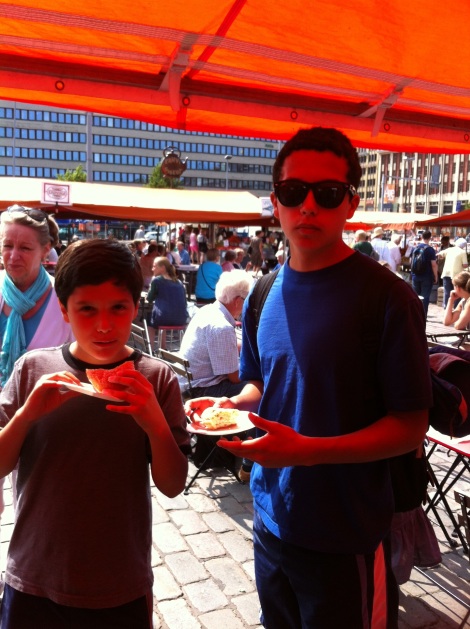 However, the perfume of the market must be what convinces people to linger here. It’s berry season and there are dozens of stalls selling them. The strawberries we bought weren’t much to look at, smallish and squeashy, but they had an immense aroma and when bitten, dissolved in your mouth. Even though it’s been years since I’ve had such good strawberries, my mouth remembered this is just how they’re supposed to taste. The boys couldn’t believe how good they were and we ended up having to buy more.

At this point, MariAngeles noticed we were still strolling thru the market and told us to get out of there and go visit Suommelina: a fortress set on an island across from port. We told her we would but after visiting so many palaces in Russia, we didn’t feel much like it and instead walked all over town. 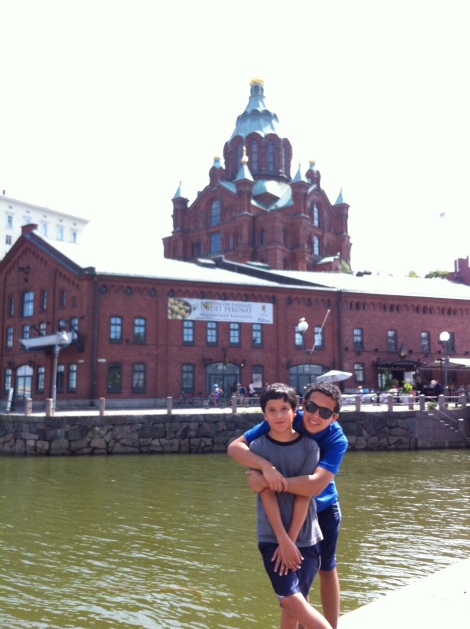 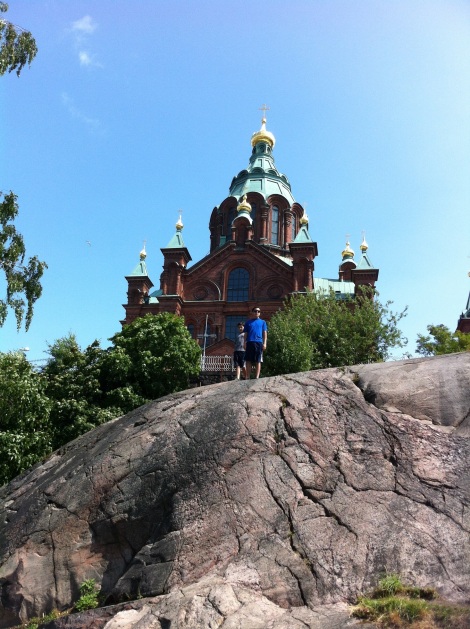 The sight of this delibery truck gave me the incentive to climb a very steep hill only to be terribly dissapointed when we arrived and I discovered it was a soda advertisement! 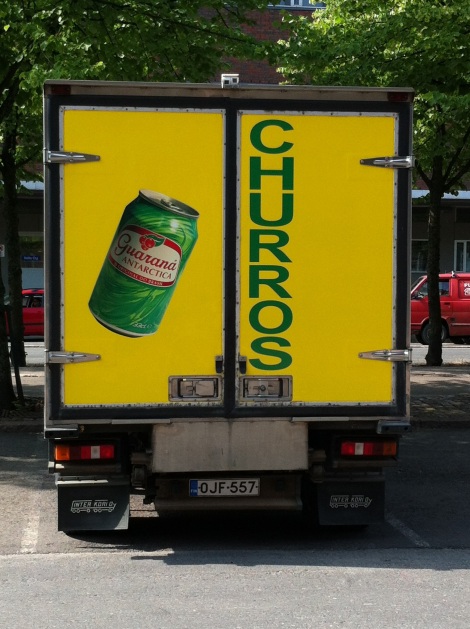 Helsinki is very, very clean. We saw this group of girls picking up trash by hand one piece at a time.

Repairs were being done to a street and even the paving equipment was as clean as brand new. This is what we wondered the most about and wished we could have approached the crew and asked how they managed to pull that off.

Slowly we made our way back to the sea where the boys threw rocks into the water and we waited for our night ferry.

That evening, what we thought would be a small ferry turned out to be a huge cruiser with over 10 floors. Apparently, these companies take the opportunity of filling up the dining areas of those liners while they’re not being used in order to ferry passengers on the Baltic Sea. We cruised right by Suommelina on our way out. 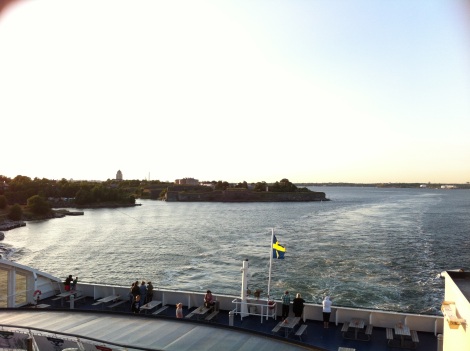 The boat ride was boring and uncomfortable, dining area seating is not designed to be sat on for three hours at a time. There were tons of slot machines on every floor and even small children were given coins by their parents to gamble with.

On arrival, the Finns on board pushed and shoved to get out. That really took us by surprise, guess we expected more civilized behavior from the Finns. Maybe it is that those in the capital are so bored with the tourists they can’t be bothered to be nice, it’s probably different in the country.

We were not impressed with Finland. Although the Finnish coast is very pretty and Helsinki spotless; it doesn’t have much to entertain, high prices and unfriendly people make it a scratch from our recommended itinerary.

Our trip picked up from here because the Baltic countries turned out to be fabulous but that a story for the next post.