Sacred Valley of the Inkas

Posted on July 13, 2011 by myfamilytravelsblog

We had a bad trip from Arequipa to Cuzco with Fernando (son) alternatively being too cold and burning up. It had been raining for four days in Cuzco and when we arrived it was freezing cold. Although we had reserved a room in a hostel recommended by fellow travelers, we had to move because the room was unbearably cold and we were worried about Fernando’s condition. We landed in a much nicer hostel and spent that first day sleeping and recovering. I believe that made the difference between going on and fleeing home.

Cuzco is set at 3300mt (10826ft) and the altitude affected all of us. To help with the symptoms, people here take “mate de coca”, coca leaf tea. It must be an acquired taste because we just can’t force ouselves to like it, but we’ve been drinking it everyday in the hopes that it will make us feel better. Fernando has been the most affected by “soroche” (altitude sickness); he was listless, sleepy, and went two days without eating anything. Being that he has a bottomless pit instead of a stomach, that last symptom had us quite worried. We took it very slowly until he began to feel better.

What is worth noting though is the perfect edges into which each stone was carved to allow them to join together with such precision that it’s impossible to even place a sheet of paper between them.

The old Cuzco was designed under the rule of the Inka Pachacutec to have the shape of a Puma, sacred animal for them.

The city has grown a lot since those days but it still has all of its colonial charm. We took a city tour on an old-fashion trolley which took us to the highest point where we encountered a local musician. After asking where we were from he quickly made up a song for us and even got the boys to participate.

Next we visited the ruins of Sacsayhuaman.

There are a myriad Inca ruins around Cuzco, together they all make the Sacred Valley of the Inkas. Since Fernando wasn’t yet feeling well we gave ourselves permission not to visit them all and instead spent most afternoons strolling around the “Plaza de Armas” and Cuzco’s cobblestoned narrow streets.

We were “stuck” (believe me no sacrifice) in Cuzco for 4 days due to Fernando’s illness. By the time he started feeling back to normal it turned out that Machu Picchu was celebrating 100 years of its discovery and it was only open for the VIPs which came from all over for the celebration. We stayed in Cuzco and got to watch the festivities there.

We also saw a huge protest against these celebrations. Machu Picchu was “discovered” by US Yale professor, Hiram Bingham. Some in Peru consider him nothing more than a looter since he took every artifact he found with him. Just several weeks ago, Yale finally (after decades of disputes) returned a shipment of these to Peru but there is still at least a fivefold of Inka artifacts in the US. A local boy, Pablito Alvarez, guided Hiram Bingham to the ruins which the locals had known about for years but neither he nor anyone else is given credit anywhere. We only found out his name from our guide while touring the ruins but more on that later. Another cause for the protests is that ‘Peru Rail’ has a monopoly on the Machu Picchu ruins. The only way to get there is by using their trains which are highway robbery expensive. Peru is divided into departments (states), one of which is Cuzco; the city of Cuzco and the ruins of Machu Picchu belong to the department of Cuzco. 80% of cuzqueños have NOT ever visited the ruins because they can’t afford to. To make matters worse, Peru Rail is a UK-Chilean company not peruvian. We couldn’t help but feel empathy towards the protesters while at the same time realizing that we are part of the problem since we helped keep Peru Rail in business with our visit.

What has truly irked every one of us is that it seems like every person in Cuzco and their cousin has their hand out expecting to be paid for even looking at them. Although it does make for some quaint pictures.

Trying to save money, we rejected the hundreds of touts who assaulted us every 2 minutes with offers of tours and planned our own tours, we saved about 100USD per person.

When Fernando was feeling well enough, we took a local bus to Ollantaytambo. Aren’t these views of the Andes from the road awe-inspiring? 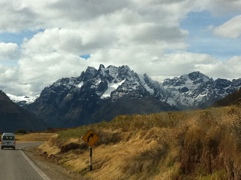 The locals told us that just 5 years ago you couldn’t even see the rock underneath due to the quantity of snow.

We stayed the night at a little hostel here. Those are the ruins of Pinkuylluna on the right and the snowy Andes on the left.

During the afternoon we visited the ruins of Pinkuylluna.

That dog is “Chucha”, another one of the strays the boys have been collecting throughout our trip. She followed them everywhere during the two days we spent in Ollantaytambo. We definitely recommend staying a night in Ollantaytambo. While Cuzco is beautiful, we found Ollanta to be less touristy and people aren’t as pesky when selling their crafts, a respite for us. We ended the night at a little restaurant across the Plaza de Armas where we tried alpaca steak and watched Peru beat Mexico 1-0 in the Copa America.

The next morning we visited the better known ruins of Ollantaytambo.

This town has no reason for being other than to cater to the tourists on their way to Machu Picchu. It’s literally full of restaurants and hostels and nothing else. We arrived in the early afternoon and spent our evening in the Plaza de Armas where we had an interesting discussion about politics and architecture with a pair of peruvian brothers from Lima. We ran into Matti (the finnish guy from our Galapagos trip) here, he was just arriving from 4 days hiking the Inka Trail. That must have been an amazing experience, next time I guess.

We got up at 3am the following morning to stand in line for the bus that would take us to the entrance to the Machu Picchu ruins. The line was already several blocks long. Why so early? Only 400 people per day are given permission to climb the Wayna Picchu, the nose-shaped mountain seen in all the pictures. We wanted to be part of that crowd. The buses begin loading at 5:30am so we stood in the freezing morning for almost two hours. Some people walk up instead of waiting for the buses and once you get to the ruins there’s another line to get your ticket stamped. We were about 10 people too late and didn’t get to climb the Wayna Picchu. We did get to see the sunrise over the sacred mountain though and that was worth it all for us.

We hired a guide to walk us for almost three hours thru the ruins and it was worth every cent.

After he left us, we finished touring the ruins ourselves and then found out that we could climb the Machu Picchu mountain instead of the Wayna Picchu. The Machu Picchu isn’t as well known and thus has almost no visitors, although it is higher and offers better views from the top. We began climbing but Fernando (son) wasn’t feeling up for it so Fernando (dad) and Ale went up

while Fernando (son) and I went back down. It took them three hours to come back, time which Fernando used to take a nap with a baby llama and I spent just looking at our surroundings, words are not good enough to describe them.

Although the ruins themselves are spectacular and it boggles the mind to imagine the dedication and time it took to build them, the setting takes your breath away and was the best part of it for me.

Most of the tourists had left by then and although I am sure this isn’t so, it seemed like we had the place to ourselves. When Fernando and Ale came down from Machu Picchu they were exhausted from the climb and their legs were shaking. We spent another hour petting and feeding the llamas which roam the ruins and are used by the park as natural lawn mowers.

We then slowly made our way down and just as we were about to leave, the setting sun made a rainbow over the ruins.

What could be more idyllic than that? It was a perfect day and we all felt a natural high.

We had just enough time to catch the bus back to Aguascalientes and from there the train to Ollantaytambo. Another example of cuzqueños fixation with extracting the most money out of tourists: during the train ride back, the attendants who are supposed to serve snacks and drinks also organize a “fashion show” and model seriously overpriced alpaca items and then push them on you. It wouldn’t surprise me to learn they work on comission so insistent were they; but not even that could ruin our MP high.

From Ollanta we took a bus back to Cuzco and arrived around 10pm, tired but unable to sleep from the excitement. The next morning we took a bus-tour to Puno on Lake Titicaca. We were going to skip Puno because there had been miners protests which turned so violent several people died and bus companies suspended service due to the protesters closing down the roads. Service was restored a day ago so we’re on our way to Puno and the bolivian border.

One thought on “Sacred Valley of the Inkas”