Welcome to the Jungle!

Posted on July 5, 2011 by myfamilytravelsblog

Our time in Lima was interspeded by a trip to the Jungle. We visited Iquitos, a city of half a million people unreachable by land, set on the banks of the Amazon river. 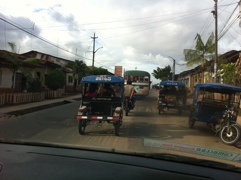 At Iquitos, the rivers Marañon and Ucayali meet and form the Amazon river, the widest and most plentiful river in the world. 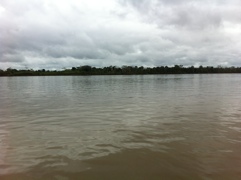 To reach Iquitos, you need to take a 2hr flight from Lima or a 4 day boat ride. Needless to say, we flew. Once there, we took a 2hr drive to Nauta, a tiny town and the only land connection to Iquitos. From Nauta, we took a 2hr boat ride on the river and then turned into the old Marañon river causeway. The river changes causeway depending on seasonal rains and floods. Halfway thru we had to change canoes because a tree had fallen down and impeded the way. We were travelling in two canoes, one carrying people and the other supplies. Our canoe was all cushy and had a roof. 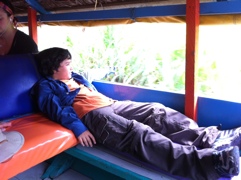 The canoe with the supplies was more rustic and didn’t have a roof so was able to go under the fallen log. We all scampered from our canoe, over the fallen log and into the supply canoe without anyone falling into the river.
When we finally got to what seemed to me the middle of nowhere, we still had a half hour trek thru the jungle to reach our lodge. 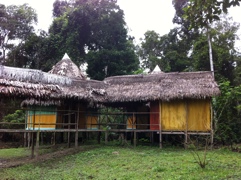 We were deep in the thick of the Pacaya Samiria reserve.

Travelling with us were two gentlemen from Lima and a pair of young (18!) girls from California who had just spent six months of their lives volunteering for a relief organization, a really nice crowd.

The boys got a cabin to themselves, and we shared a bathroom. 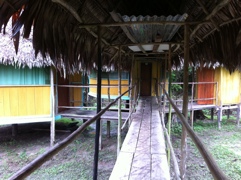 The lodge is set in front of a lagoon and built on stilts because during the rainy season everything floods and the lagoon connects to the Nanay river. The rooms are covered by nets to stop the bugs from coming in and there’s no electricity or hot water. You might think that you wouldn’t need hot water in the jungle but when you’re coming back from a night trek sweaty and sticky with bug repellent and all you want to do is crash, the last thing you need is an invigorating cold shower in the dark. Is that the soap or a scorpion?

We spent three days and two nights here. It is so humid there that my video camera suffered a malfunction and began taping in greenish sepia tones. Although jungle animals are plentiful it was very difficult getting them on camera. They move fast and seriously distrust people so there’s no way to get close to them. We saw tons of birds, kingfishers, herons of all kinds, vultures, and hawks. We saw flocks of parrots. I realize they’re birds but I guess I never thought of them travelling in flocks. My pictures don’t do them justice but this one likes to hang around the lodge’s kitchen and steal food, her name is Mayra. 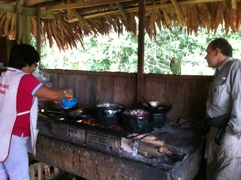 Our guide took us on day and night treks thru the surrounding jungle. Another guide always travelled at the front of the line wacking the vegetation with his machete to drive out the poisonous snakes and we were advised to not stray from this line. We only saw one small snake in all our time there but we could hear things moving around us even when we couldn’t see them. This is a line of leaf-cutter ants. 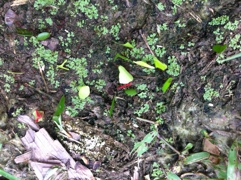 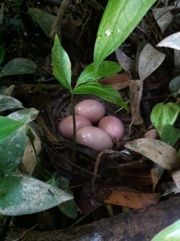 The mosquitos were murderous. On our first day we had used a 40%DEET repellent and I think I could hear the mosquitos commenting on how good we smelled. After that we used a 98.11% DEET repellent that we had carried at Fernando’s insistence and which I thought wouldn’t be necessary. Even with that stuff on, we had to wear long pants, long sleeves and rubber boots and only then did it become bearable. Our guide showed us how to spot termite nests, and get some of them to crawl on us, rub them into our uncovered areas and that would act as a natural insecticide. 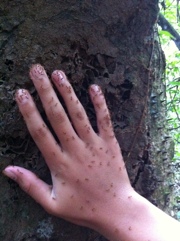 We took a nighttime canoe ride on the lagoon on our first night there to look for caimans. It was pitch black and cloudy so we couldn’t even see the stars. We all got into the rickety canoe and set out. The jungle is loud at night! We could hear all manner of hoots, calls and growls. It didn’t take long for our guide to pull a caiman out of the water and ask who wanted to hold it. The only volunteer? Of course… 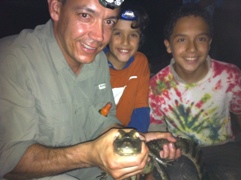 While we looked for more, strange “birds” kept swooping down around us and pulling fish out of the water. As one came into the circle of light thrown by my headlamp I realized they were huge bats! They became my favorite. Our guide kept talking to us about all the species that were living in the water. I suddenly realized that we were on a lagoon full of caiman, electric eels, pirahnas and possibly an anaconda or two. During the day, the water is horribly murky, at night both the sky and water were black. Our tiny canoe was beginning to take on water and I got an attack of the giggles in a nervous fit as I thought that I had willingly agreed to do this, worse: I actually paid for the priviledge. The guide didn’t appreciate my sense of humor…

The next day we took a canoe ride to where the Amazon is born to look for river dolphins. There are two kinds of them: grey and pink. We saw lots of both. I thought pink meant that they would have a pinkish gray tone but I was wrong, they were as pink as the pink crayon in a Crayola box. The dolphins swam all around us hunting for fish. Unfortunately they don’t jump as high as sea dolphins do so most of the pictures I took show nothing but water.

We visited the jungle at the beginning of the dry season. The local villagers plant rice, watermelon and potatoes on the mud banks left when the river recedes and our guide pointed some of these out. We visited a local village and got to see how the people live. A little two year old boy suddenly ran past us with a machete almost as tall as he was and no one batted an eye. And to think I force my kids to wear helmets… definitely a different kind of life. 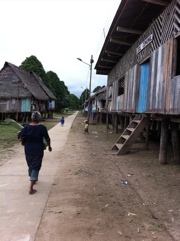 Here a family is cooking a huge batch of rice to extract all the starch from it. They will then use this starch to mix in with all their food as a source of energy. This amount will last them aprox. 6 months. 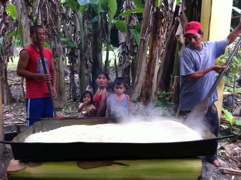 Another family had “found” a baby (6 months) sloth and taken it home as a pet. They let us hold it for a few ‘soles’. 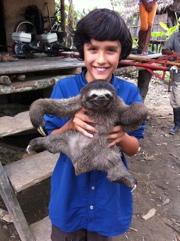 What kept striking me the most though was the poverty they live in. 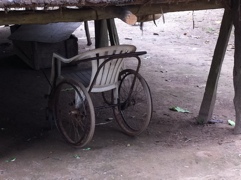 On our way back to the lodge, our guide spotted a sloth in a tree and decided to bring it down to show us. 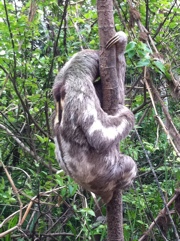 I thought bringing it down meant coaxing it down but our guide used his machete to cut down the tree which fell to the ground with the sloth still attached to it. I’m surprised it didn’t get hurt. Ale was very upset at this treatment of the sloth. 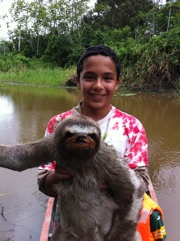 We took a trek thru the jungle to look at different medicinal plants, flowering dracaenas and the huge ceiba trees. 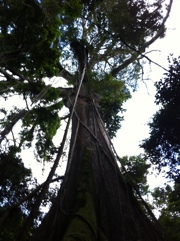 Fernando and the boys decided to copy the monkeys we could see overhead and tried to climb the ceibas. 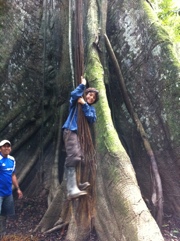 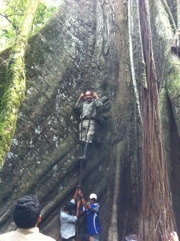 That night we made a trek thru the jungle and saw mostly insects and spiders. 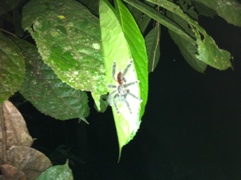 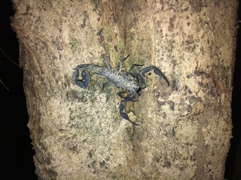 We went fishing for pirahnas in the lagoon the next day. 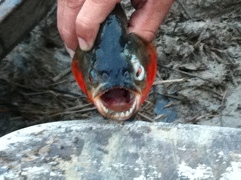 I caught a sardine and a tiny pirahna, both of which Fernando quickly cut up to use as bait. 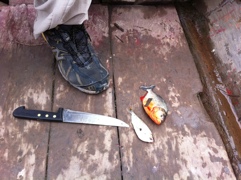 I didn’t catch anything else. The boys caught 6 pirahnas between them. 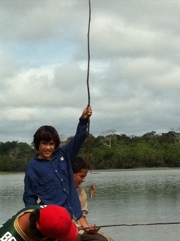 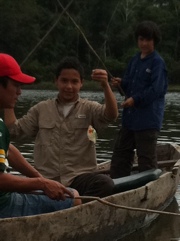 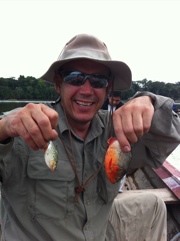 We left that afternoon back to Iquitos and our flight to Lima and civilization. The boys loved the jungle. Me? I really enjoy electricity and indoor plumbing.